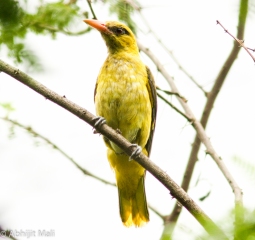 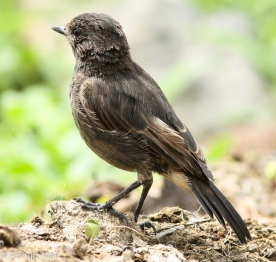 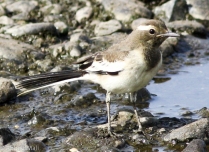 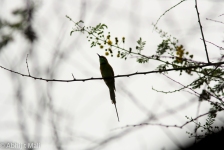 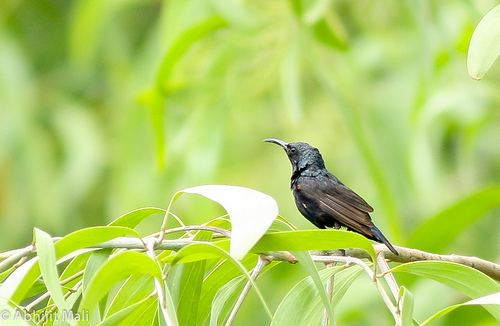 The Purple Sunbird is a small sunbird. They feed mainly on nectar and insects, especially when feeding young. They have a fast and direct flight and can take nectar by hovering but often perch at the base of flowers. The male purple sunbird has two distinct types of plumage. The breeding male is characterized by the metallic bluish-black body, and the tuft of crimson and yellow feathers under each wing. Females are olive above and yellowish below.
The non-breeding male (below) purple sunbird has a much duller plumage know as the ‘eclipse plumage’ that is similar as the female, and have yellow underparts and a dark line of feathers running down the center of the throat and breast. The purple sunbird female (above) have indistinct super-cilium behind eye. The photos of the purple sunbird have been taken near my home. They come everyday in search for nectar on trees and their calls include a “chwit” or “chwing!”. In the morning they wake me up with their rapid rattle followed by ringing, metallic songs.

The Indian Cormorant or Indian Shag is found along inland waters of the Indian Subcontinent. Young and non-breeding cormorants are brown in color. They are often found in large groups and often fish in groups, the photo taken above is shot at kavdi pat near Pune, Maharashtra. I think it was their resting time in the afternoon and most of the day they spend their time sitting on the rock at kavdi pat. They often make short dives to capture fish in the water and when in water the body of the bird below its neck is submerged in water.

Spotted Munia are commonly seen in western ghats in Maharashtra. Spotted munia often sit on the trees nearby my house. They are also known as scaly breasted munia as they have scales on their chest. The breeding season is during the rainy season (mainly June to August in India) but can breed at other times.The calls include a short whistle, variations on kitty-kitty-kitty and a sharp chipping alarm note.

I was following the swallow for quite a long time and then it sat on the ledge of the bridge and then I was able to capture this beautiful moment !!! 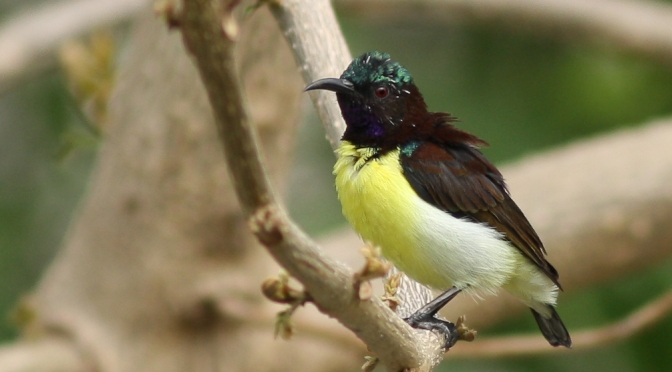 These types of sunbird are found in western Maharashtra. The above type is male purple rumpled sunbird. This one comes in front of my house nearly everyday and feeds on the nectar in the flowers on different trees. It does not stay at one place for long time and makes short and loud whistling sounds. They are generally present in pairs and the other one is present nearby. The male and the female purple rumped sunbird are different in size and differ in coloration. Below is a photo of a purple rumped female sunbird.

The bird in the left hand side is the purple rumped sunbird female. The male and the female sunbird are often seen together and move around in pairs.

Welcome to WordPress.com! This is your very first post. Click the Edit link to modify or delete it, or start a new post. If you like, use this post to tell readers why you started this blog and what you plan to do with it.